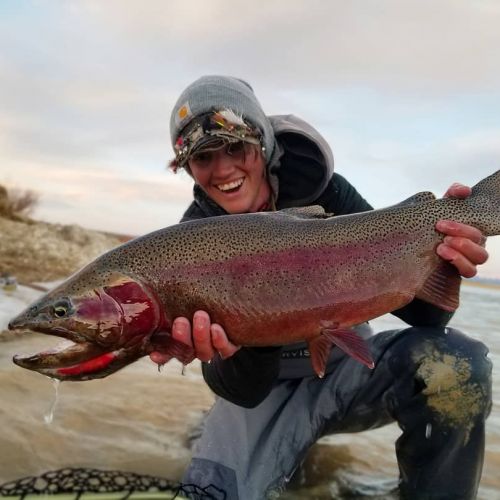 Rob is a major trout bum up in Walden, Colorado. He has been coming to the North Park area for years with his family and fell in love with its wildness and abundance of water from a young age.  Rob joined the North Park Anglers crew in 2017 right out of high school, and hasn’t looked back since! His passion is throwing giant streamers at small stream browns and chasing trout that inhabit the still waters all over North Park. From April-November, you’ll find him out on the water somewhere in North Park chasing the big one!

Fishing in April-May: The North Platte and its tribs are pre-runoff/runoff at this point and fish are starting to get a little more active. Since there isn’t much happening for hatches, the name of the game is big streamers and nymphing a stone and worm. The stillwaters around the valley are icing off this time of year as well, which can be one of the best times of the year to fish them!

June-July: Float Season. We are a completely freestone system on the upper North Platte, so our float season is dictated by runoff. As long as the conditions allow, we float Northgate Canyon on the Platte just over the Wyoming border. Salmonflies, Caddis, Hoppers, and streamers are all on the menu on this beautiful wilderness float. As water starts to come down from peak runoff, the smaller tributary streams start to light up, and the hopper fishing can be world class!… The fishing can be incredible this time of year, although during drought years this season can be short. Enjoy the water when it’s there.

August-September: The dry fly fishing starts to slow down just a bit and so does the river flow. We’re always hoping for rain this time of year to keep the river level up and the water temps low. There is still good fishing to be had, but the fish come first, and if conditions are rough, we have the option to fish stillwaters as well. As we get into September, The water temps start to drop down, and the fish start to put on the fall feed bag before the big freeze. On both the lakes and the rivers, this can be one of the best times of the year to catch a giant brown!

October Is a great time to be on the water in North Park, but be aware that the weather can get crazy quick this time of year. The lakes are the main draw late in the season, as the river temps are usually in the 30’s to low 40’s by the middle of the month. The stillwater fish are usually finishing up their spawn, and putting on some pounds before the ice. Depending on weather, sometimes our season runs into mid November, and some years we’re an icebox by the end of October. Fell free to reach out and We’ll get you dialed in on conditions in the park!

This website uses cookies to improve your experience while you navigate through the website. Out of these, the cookies that are categorized as necessary are stored on your browser as they are essential for the working of basic functionalities of the website. We also use third-party cookies that help us analyze and understand how you use this website. These cookies will be stored in your browser only with your consent. You also have the option to opt-out of these cookies. But opting out of some of these cookies may affect your browsing experience.
Necessary Always Enabled
Necessary cookies are absolutely essential for the website to function properly. These cookies ensure basic functionalities and security features of the website, anonymously.
Functional
Functional cookies help to perform certain functionalities like sharing the content of the website on social media platforms, collect feedbacks, and other third-party features.
Performance
Performance cookies are used to understand and analyze the key performance indexes of the website which helps in delivering a better user experience for the visitors.
Analytics
Analytical cookies are used to understand how visitors interact with the website. These cookies help provide information on metrics the number of visitors, bounce rate, traffic source, etc.
Advertisement
Advertisement cookies are used to provide visitors with relevant ads and marketing campaigns. These cookies track visitors across websites and collect information to provide customized ads.
Others
Other uncategorized cookies are those that are being analyzed and have not been classified into a category as yet.
SAVE & ACCEPT